Heyhey,
Sero, Cecilia and myself would like to move the table to the gallery.

(It’s going to make a lot of space for empty desks to rent, because all this unused space in Cecilia’s room should be used by fixed members, I believe) 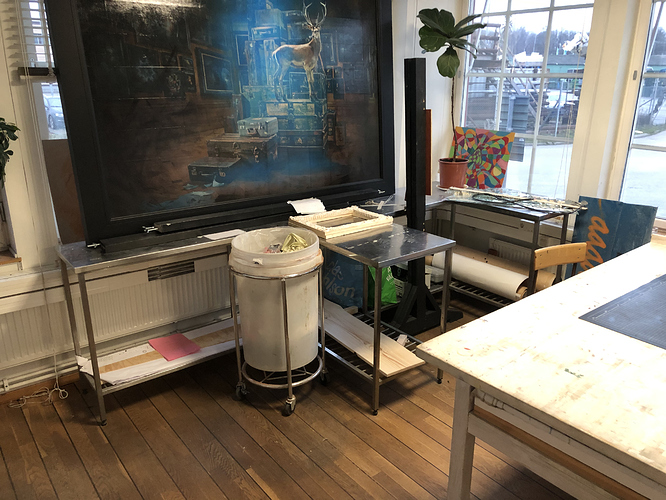 Right now Blivande has around 20 Tau members. In about a year from now, we are hoping to have around 40 Tau members + 30 Beta members with access to Tau + around 10 staff and community members.

At that point, there will be more demand for open space for the regular “non-fixed” Tau members. The room Cecilia is currently in has always been intended to fill that need eventually - which is why we want to take down the walls and make it bigger, as that would allow for many people to work there at once.

If we use it as a room for fixed members, where should the future regular Tau members work on their projects? Or the Beta members who need to use Tau occasionally?

Tau needs to strike a balance between meeting the needs of full time artists and the creators and makers of the Blivande community. That’s one of the things that makes this place special.

move the table to the gallery.

As for the table, I agree that it’s not very nice. It’s uncomfortable to sit at and not very inviting as a space. I think we can do better. @hampus owns that table though, so he has a say about where it goes.

As for the table, I agree that it’s not very nice. It’s uncomfortable to sit at and not very inviting as a space. I think we can do better. @hampus owns that table though, so he has a say about where it goes.

Yes, it’s never been meant as a permanent part of the space. Moving it to to gallery is however not a well-thought through suggestion for several reasons.
Primarily being that the Gallery is now very nicely decorated as part of Secret Experience (something that I haven’t seen discussed here on the forum by the way @bobspeakman & @NinaLindberg).

I discussed this yesterday with @cecilia_ulfsdotter and explained then that there is currently no free space to place this table outside from the Open Space room itself.

As soon as we get the ceramics container it could come to good use in there I believe. This should happen in the coming 3 month period if finances will allow (we are waiting for news as to whether we get the grant we applied for to build such a container).
What’s the ETA on that decision @hugi?

I don’t quite see the urgency in this however. The room is not over-occupied as it is now with its current configuration (and that was before the whole storage wall was removed).

What’s more pressing now in my opinion is that @Simon collects his large painting standing on top of the table which given its fragile nature prohibits work in its vicinity. It has been there for several weeks and placing it there was meant to last only for a couple of days as quick fix to an immediate problem.

We also need to have a discussion on the placement of @cecilia_ulfsdotter’s 4th painting (the one standing in the middle of the room). I know Cecilia will start a forum thread about that very shortly so we can discuss that further there.

What’s the ETA on that decision @hugi?

Unclear. No word yet.

I don’t quite see the urgency in this however.

@cecilia_ulfsdotter, @Alex.Colard - do you see an urgency here? Is there something we’re missing?

I know Cecilia will start a forum thread about that very shortly so we can discuss that further there.

My paintings will take extra space till 15th of April Tau: Art & Makerspace

Dear all As some of you might have noticed my paintings are taking more space than what I am renting at the moment. I just had a meeting with Hampus and we agreed that is ok as long as I ask the rest of you here on the forum for the best solution for everyone. So there are three options 1, keep it as it is now (pros, the big white wall is free, cons, might feel in the way for people doing splattering stuff on the working tables (although now we have much bigger floor space for such works) 2,…

It’s just that there is soooo much space in the “communart” room (Cecilia’s) that is not used, but it’s fine I guess if that’s the plan.

No rush to move the table, true.

Thanks for taking care of it so quickly @Alex.Colard!

It’s just that there is soooo much space in the “communart” room (Cecilia’s) that is not used, but it’s fine I guess if that’s the plan.

Until we’re in a situation where there isn’t any unused space in the room during peak hours I won’t see the rush in terms of priorities. Of course we’re all in agreement that the room should be optimized in terms of space and that it is somewhat suboptimal in its current configuration.

As I said though with the removal of the storage shelves there’s been a major improvement already. Let’s wait a bit and see what effects that will have before we push on further given the lack of storage spaces elsewhere.

Fundamentally this is also a matter of perceptions. It’s difficult for me to currently be up-to-date on how the room is really used in practice now that I’m away from the house. My experience has been that whenever I have been in the house over the last couple of months I have very rarely seen it being used by more than one person at a time (or one person + Cecilia in her corner). And for that usage it’s big enough as it is the way I see it.

Here mileages may and will vary so please complement my take with your own views! The only way we can make this work is by communicating our different needs and experiences for synchronization.

And the beds in the basement have been moved 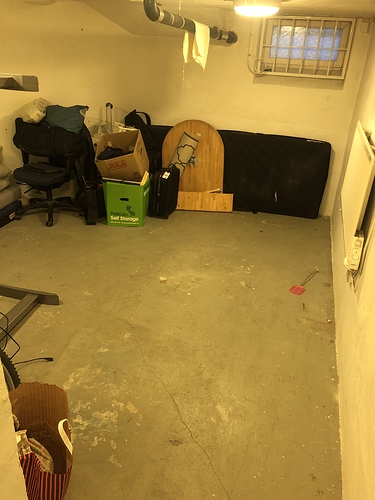 Great! Different topic though. Next time create a separate thread.

So… that’s the basement! I never ventured there. Exciting

I have kind of changed my mind on this topic, I agree with @hampus that it has use for flex members to put unfinished projects, and if we wouldn’t have that table those projects would be left on the working tables which is no good. The silver table allows for the working tables to be clear at all times, which is much nicer when a new person comes in to start a new project.

My only other suggesting is to replace it with the stainless steel table in the gallery container as it could fill the same function, but it takes less space.

I agree that it would be much better with a straight table, it’s just that we don’t have the space to do the switch right now. When we get the new Tau container for ceramics that will change.

Would not be too happy to take it to the gallery container. It doesn’t have a use there and we should really try to make the containers out there not storage for random stuff.
The saying goes, don’t move stuff you’ll have to move again later.

Unless you have no other choice in the short-term, which is often the case at Blivande.

In any case, the table won’t be moved anywhere right now. There are bigger fish to fry and things will change with the new container once it’s here.

Yes of course, more a tongue in cheek joke that frihamnstorget is mostly a place where we move stuff around from on place to another

, but we have been getting much better at it and I really like that.

You can say the same thing about life… Humans are nothing but pretentious atom movers at the end of the day.