PQ bus-fix 9th of may 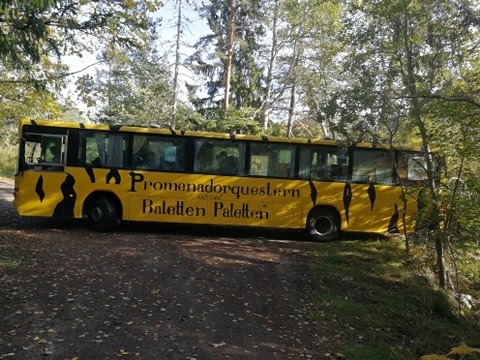 Hey! As i mentioned on the meeting i have been pushing to get some parts of KTH to start coming to frihamstorget during some small promo-gatherings.
One of the groups from there is PQ promenadorquestern med baletten paletten. Its a big band jazz orchestra and ballet community that has been there since the darn of time. My fast description of them is that they are the “burners” of KTH without knowing it. They are one of the most open artistic and flexible community’s there, sometimes seen as sketchy outsiders with their tights playning their 20s music and dancing. As a community they are quite odd too as the are open for almost anyone to become a member, eg you do not need to know how to play an instrument to join their big band orchestra, as long as you participate and do something in the community. So quite burnerish mentality in the openes and the way they are governed. Some of the members like Nygren (bus-responsible person) are long running parts of our community and the node, parts of PQ with their small band OM (orquestermaskinen) has previously had two small concerts in the old node. So its not that strange that i want to get them in deeper in to the rabbithole. That has ofc always been an issue with all planing competition of dates etc, things always are on the same day… But yeah ideas have been maybe to involve them in a concert in frihamstorget in the future? Or who knows maybe gain individual members of makers? or maybe the node wins something, ofc nothing might happen or even more might happen no one knows the limits. As many of you know first “contact” is always special and difficult, specially in inviting an organization that has its own infrastructure. But covid19 did it to us, as the toilets are closed on KTH campus and they were planing to have their big bussfix (yeah ofc they got a big artsy bussy thing that is painted as tiger) i suggested it together with Nygren to be in frihamstorget. As the infrastructure is there why not! This nice oportunity came up the date was chosen as it was the day that the big qArnevalen had been (big makerthing with artsy cars and od contraptions yada yada google it) and most students are free. Hopefully a nice small core-team of them will be available. We might be 4 we might be 14. My hopes are not set high at this particular day its just we offering them some hospitality, who knows they might like the place?

So the practical stuff, Nygren is bussis eg the responsible person of their tour bus they are planing to have a small gathering and fix stuff on it clean it changing some parts and service it for the yearly bus inspection by the dear state. I offered them to be in frihamstorget so they get toilets a place to grill their food some water and power. They will come at lunch and leave at 18, maybe later. Maybe there is a small micro after-party in the bus at KTH and ofc you are welcome if so practically we do not need to get involved in their bussfix (of you are welcome to) then just talk to Nygren on location.

My responsibility: im going to host them and see that their needs are dealt to:
Fix watersuply, bring the waterjetcleaner
Fix powersuply
They got tools but if something is needed im going to take responsibility for fixing and returning that.
Se that they got acces to some sort of grill and so on
Se that they follow practical guidelines LNT etc (they are really good in that manner and trust them 100%)
Ofc as their host i will present the possibilities with the space maybe tour them around some have been there before they will ofc post in their channels about us.
I will fix with work-music and so on.

So in practice they will park in the parking-place (we have been there with bus checked a good position) bring some joy and music to the place and then leave with no trace, just a single sparkle of glitter that might grow to something in the future if it does not blow away in the wind.

So any objections? concerns? My hope is if the weather is fine that many of you will be there joining in your own projects, there will always be the possibility to help each-other! Its ofc always nice when we got guests that people are there presenting ourselves and representing the area and maybe all together join the grill and drink a couple of cold ones?

With my own dark past of KTH student culture, I can vouch for PQ being a great bunch of people who I think will fit in really well with the crowd of Blivande.

I say a resounding yes!

After the fix the bus would return to its usual place at KTH?

Disclaimer as its covid-times we might not even get people that feel that they want to fix on the bus and instead practice social distancing, so there is quite high possibility that its just me Nygren and one or two more. But as i said is worth a shot, at lest we will get a nice picture of a tiger-bus in the container area and something fun happens!

Yes ofc it will return they got a dedicated parking place there!

It’s important they dont make the place dirty… my advice is to drive it up on a tarp in case they need to fix something that has to do with oil.

Do we have a finish date?

What are they going to fix?
Is there anything that might damage or incapacitate the bus so that we have a broken bus there?

I understand the concern! The bus is in pristine condition mechanically, it’s travelling across Europe with no concerns. So no engine fix or so, only an engine cleaning and that will done at kth.
It’s more of a spring cleaning fixing a broken window that some punks broke last weekend. Fixing a turn signal that is broken and a fender that is hitting the brand new tires

Also if possible straighten out a metal bar that makes the battery compartment difficult to close.
Then ofc spring cleaning and polishing the details cleaning drainsystem on the roof and mostly some work inside some wood protectors in the bar area needs to be fixed. Control all safety features hammers fire extinguishers So it will be most fun stuff. And ofc drink beer and grill some nice bratwursts!

Time is set aprox 12-18 ish so itwill be away before sunset as we do not want to drive around in dark, also driver wants to return it fast so he can join us in an afterfix beer!

Fun stuff! I’ll be around at the square.
We should plan some food/BBQ.

This sounds like things that are clean enough. And FUN! I’m happy they are coming and hope to meet them!

The response was nice, the direQtur Klara was there and they loved the place and i think we might get some future happenings with them!

Great! I would be really excited for more KTH overlap.