Me and @hugi had a great meeting with Ylva and Diana today, which led to some interesting and important thoughts around the Plato project. I’m putting them down here so we keep them in mind.

These are the current models for citizen involvement in urban processes, ordered from no engagement to full citizen initiative:

Plato is mainly working with the latest of these steps, but can also be used for the penultimate step. We should use this explanation when explaining what Plato is about, as this is information that is obvious to us, but not necessarily to potential users.

What processes can be subject to citizen initiatives

This table shows the process in our different stages together with projects of different scopes. Plato’s main focus is the area marked in gray, which can legally be subject to citizen initiatives. 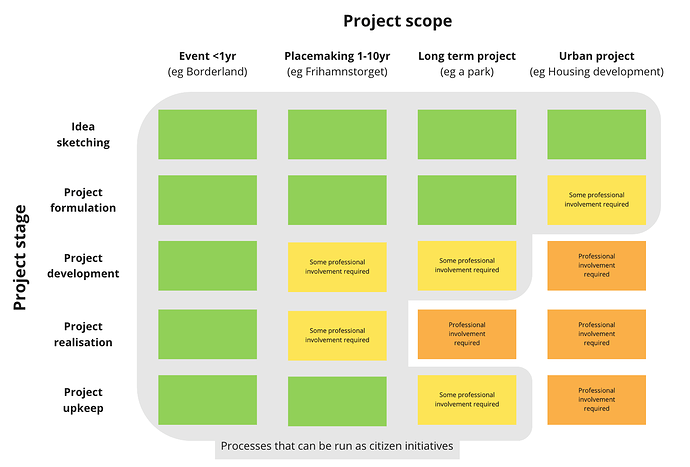 Main takeaway from this is that our key focus is not large architectural/urban projects, but smaller projects - citizen organizations, schools, etc. We are working from this assumption, but it’s good to clarify it.

Ideas always exist in relation to other ideas

Currently, all ideas on Plato Ideas compete with each other without any relational context - ie all ideas are “voted” on from the same plane, they are not dependent on each other, or on specific constellations of ideas.

Example: It might be that my idea of a great sound system is dependent on Gustav’s idea of a real nice wooden dance floor. However, this idea-dependency is a one-way relationship (the dance floor can still happen without the sound system), so to merge the two into one idea is not a viable option. It might also be that Hugi’s idea of a calm and relaxing teahouse is dependent on my idea for a sound system not happening, ie they have anti-relationship (there’s a nice term for this that I can’t recall atm.)

In the context of The Borderland this has never really been an issue since we’re an easygoing bunch and solves stuff as we go along. But for larger, more permanent projects this will become increasingly important.

The main takeaway is that we need to define what constitutes the boundary of an idea in the context of Plato, and that this boundary should be somewhat malleable.

Ideas often exist in relation to a place

We need to implement a map system to Plato Ideas, to allow users to pin their ideas to the map, and explore the ideas through the map.

The current idea-view of Plato works well for smaller projects with ~10 or so ideas, for projects with more it quickly gets impossible to get an overview. This is because we show all ideas in the same view, to allow users to explore a map of ideas is an obvious solution to this. Our main focus is place-making and events, which in most cases are spatially organized. Hence idea creation and sketching need to have a spatial component.

This also opens up for new interesting possibilities with linking Plato to other tools, e’g google maps (as has already been done in a manual way within BL) and various augmented reality solutions.

We currently talk about Plato as three different tools, ideas, realities, discourse. This is a bit misleading and confusing. We should rephrase this as three interfaces, that show different views of the same data.

Different people in the org will use different views. Most users will only use the Ideas view, while some realizers will mainly use the realities view. As we’ve said before, it should be possible to access almost all data within Plato from each of these views.

This will all be a lot clearer when we have built the interactions between the different views.

The purpose of the Plato Discourse view isn’t entirely clear in the context of smaller projects (e.g a park,) and is probably overkill both in terms of tool inflation and usability. It is better if most users can stay within one view to interact with these projects.

However, there will of course be certain discussions that all users need to access, around e.g. guidelines, workshop planning etc, and which aren’t tied to a specific idea so not visible in the standard Plato Ideas view. Ideally, instead of requiring the users to go into the Discourse View to access a small number of threads, it should be possible to show certain threads on Plato Ideas that aren’t tied to a specific idea. For example, a sub-view to Plato Ideas called “discussions” that gives the user access to all Discourse threads tagged with a “show on ideas” tag.

I made this into a wiki so you can add relevant stuff.

Great insights and well written, I love all these directions. Making place more prominent, introducing relationships between ideas, and that the tools are views of the same data.

Main takeaway from this is that our key focus is not large architectural/urban projects, but smaller projects - citizen organizations, schools, etc. We are working from this assumption, but it’s good to clarify it.

This makes a lot of sense. Was thinking about today how ancient (as a negative thing…) tools we have in the housing co-op/BRF where we live. Would be very interesting to have discourse and dreams/realities, both to implement utilities or art in your neighborhood/house, and have the possibility to build some real relationships with your neighbours through doing so.