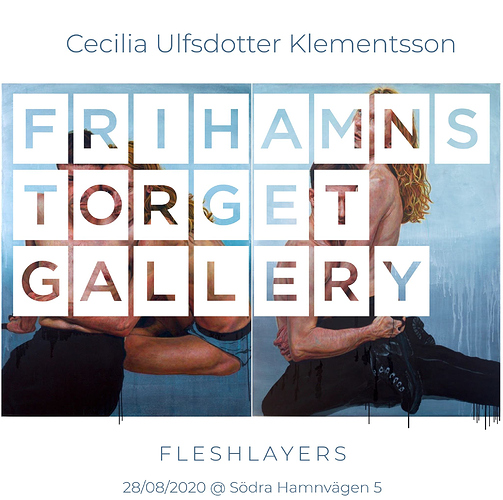 Show goes on for a week, till 4th of September.

This is a corona accommodated event, meaning maximum 4 people are allowed in the container at once, while the rest of the socialising occurs outside at #frihamnstorget.

Expect magical choirs by Milestones for the night of the vernissage.

Expect an exciting program for the rest of the year at Gallery Frihamnstorget.

Jan Watteus Is an art curator and collector in Stockholm, and founder of Kummelholmen. Jan Watteus has worked with world famous artists such as William Kentrigde.

Cecilia Ulfsdotter Klementsson is an artist currently based in Stockholm, starting a Master in Painting at the Royal College of Art in London 2020 - 2022. Klementsson lived in Perth (AU) 2011 - 2016 where she received a Bachelor of Fine Art at Curtin University 2015. Klementsson has exhibited in Stockholm, Berlin, Leipzig, Perth, and at Dragongate in Älvkarleby. Klementsson did a three month artist in residence at the Pilotenkueche in Leipzig, October to December 2019.

Klementsson paints fleshy bodies appropriating nudes from fashion advertising by switching genders and extracting colours in the skin. Keeping John Berger’s Ways of seeing in mind, Klementsson takes the nude to naked in painted appropriations, from incorporeal to corporeal. The archives of 1990s and early 2000s fashion advertising feed Klementsson’s work, an era when big fashion brands particularly pushed the boundaries of the nude, with Kate Moss in the forefront.

While Klementsson takes inspiration from the suggestive poses, she also twists them by having men pose like women and women pose like men. When we are confronted with opposites, differences in male and female poses become allmore apparent - women seductive but passive, men seductive but active.

The second aspect challenged in Klementsson’s work is the monochromatic skin tones used in advertising, letting the nude seem more sculptural and less morbid - perhaps a strategy for big fashion brands to get away with nudity.

Klementsson limits herself to four colours only, layered on top of each other like a manual printmaking process. There is a paradox in the colours because they are beautiful yet uncanny while they reveal the fragility of the flesh. It is the mortality which advertising avoids. The viewer sees something is odd, men posing like women and women posing like men, in a transparent iridescent skin, daring the viewer to be drawn to the subjects despite their colourful flaws.

@kimgajraj or @MariaEuler could any of you share it on blivande’s fb page? Introducing with a text like “this is the first exhibition of gallery frihamnstorget, with our artist in resident @cecilia Klementsson, presenting us FLESHLAYERS emerging from the dark” and with that picture?

@cecilia_ulfsdotter, I’ve made you editor of the Facebook page for both Blivande and Frihamnstorget. Promote yourself to your hearts content.