Buying a container for the laser cutter

A small update.
Tinkered a fair bit yesterday with the laser.

Had to go through the water cooling system and flush huge amounts of antifreeze out of there.
Also moved the cooler to the cabinet under the laser, so all the tubing is now also internal. This goes for the air compressor too. It saves on space, makes the unit easy to move, but also makes it harder to remember to check water level, contamination, temperature.

Did some patching and rewiring and got it firing. Did a full calibration and it seems fine. Not checked how much power it can give tho.

There is a lot of stutter on the rails, especially going faster than 80mm/s, but hoping lubing (grease) can suffice. Otherwise the bearings are shot…

I did not get around to sorting the air exhaust. The air evacuation of the laser is real important. The more flow the better for many reasons. There are a bunch of ventilation bits on site, I brought in some more. Its a bit of a puzzle/project I am happy to solve but even happier to let someone else take, partly or fully. i do think we need a bigger fan, and most probably a bigger outlet. The one fitted in the container in 100mm on the inside, and even smaller on the outside.

So, to sum up:
It works, its calibrated, it semi-clean.
It needs some love and lubing, and probably would do well with some tubes, bearings and such swapped. Exhaust ventilation needs to be sorted. I wont be able to promise any work on it before the weekend.

Also; must say the container solution is not only perfectly suited for the laser and the other neat bits of tech, but super nice to be working in. So happy for the new home for an old trusted workhorse!

i do think we need a bigger fan, and most probably a bigger outlet. The one fitted in the container in 100mm on the inside, and even smaller on the outside.

OK, how much bigger then would you say? Is it not enough if we make the exhaust 100 mm all the way through?
What minimum flow rate for the duct fan would you recommend?

Great work yesterday! Can mention to everyone that David spent 7-8 hours straight in the container, we’re all very grateful for that! 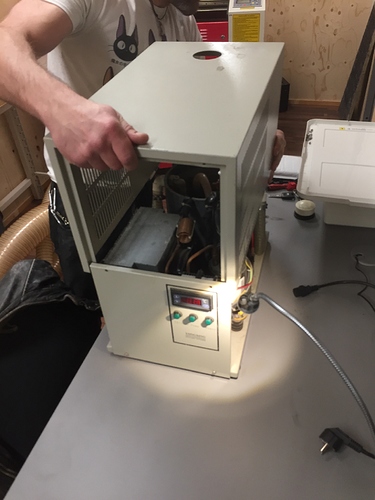 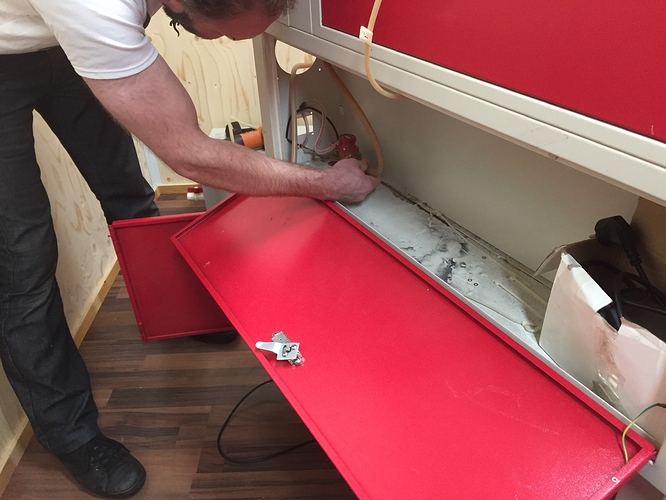 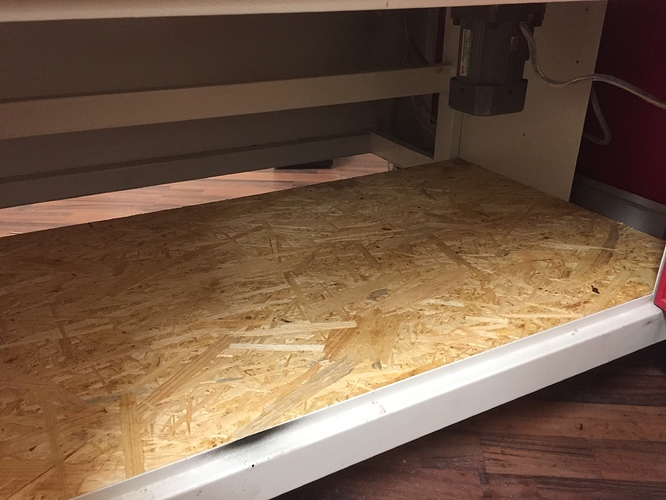 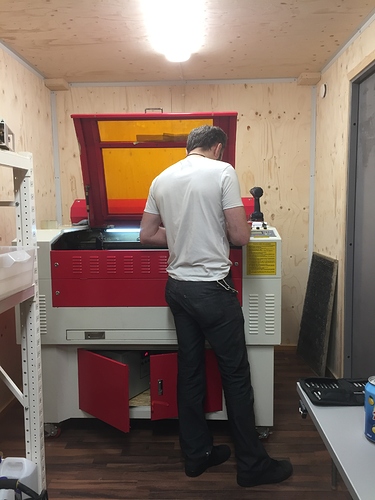 @Joannis-Magnus and I will try to get the ventilation installed tomorrow, at least the internal parts inside the container. @elch is planning to be on site on Friday and could most likely make the external exhaust hole larger with the plasma cutter then. Or tell me how to do it over the phone… What could possibly go wrong?

@DavidGiertta: When do you think you will have time to come by and test if the existing ventilation is sufficient?

I was by Wednesday afternoon. The ventilation is just enough for cutting light jobs and engraving in materials that burn clean. So it needs to be beefed up quite a bit if we are gonna cut MDF, PC and such. The huge bloody fan that was there, on the floor… Is that one not more powerful? Sorry. I forgot to check further around the vent bits when I was there

Which brings me to a thought about prolonging the life of the machine… Since we now have so many ways of manufacture in-house perhaps dedicate the laser to lighter jobs. It wont limit what we can do, the laser can still make templates for bigger/heavier/thicker jobs etc. Some tasks might involve an extra element, but also let you work smart with multiple machines. Fun!

was by Wednesday afternoon. The ventilation is just enough for cutting light jobs and engraving in materials that burn clean. So it needs to be beefed up quite a bit if we are gonna cut MDF, PC and such. The huge bloody fan that was there, on the floor… Is that one not more powerful? Sorry. I forgot to check further around the vent bits when I was there

It is indeed more powerful. 2000 m3/h vs 800 m3/h. Would that be enough to allow also MDF, PC etc?
While I agree with the general idea of saving the laser for lighter work I doubt this will work out in practice as it would only take one exception/mistake to cause problems. Better to play it safe and have enough ventilation to cover all eventualities. We could still have a rule about not cutting unnecessarily “heavy” stuff.

having a course in January and would be cool if students could use the laser cutter for cutting and engraving. Would be happy to redirect a sum (a few thousand) of the budget for whatever we need to do to get it to work at its full potential.

Would need a response by the end of next week whether it will be fully functional by mid January. In that case I can make sure to arrange introduction / traning sessions for the students, and to Blivande members.

Getting it to work reliable for cutting (for example with the budget from the course in January) and by applying an hourly use charge would be the right direction in my opinion. Cutting is key for the lasercutter and what makes it such a powerful protoyping and design tool, if we should only use it for engraving, that would be a big downside for signing up for the membership and I for example would still need to search for another place where to reliably do lasercutting.

Maybe the hourly rate could help to make sure people only use it as much as really necessary and therefor increase the lifespan of the machine?

Heya, just wanted to make sure everyone knew that cutting the wrong material can be really dangerous for humans and/or the laser cutter. See this list for details:

You are here: KB Home Laser Cutter Laser Cutter - Dangerous Materials < BackWARNING: Because many plastics are dangerous to cut, it is important to know what kind you are planning to use. Material DANGER! Cause/Consequence PVC (Poly Vinyl...

Hydrogen cyanide and chlorine gas are not something to trifle with. We definitely want to make sure people are very aware of this before letting them use it…

Actually, perhaps we can print this and post it in a few places around the laser cutter? Sorry if that’s already been done, I haven’t visited the container yet…

It merits its own sticky thread actually.

Want me to show you the container today?

David already volunteered for that. I’ll check-in w/you when we’re headed there.

Here’s a resource for laser cutting me + friends made: https://start.exploring.technology/hardware/laser-cutting

Just want to let everyone know that I went to Ahlsell some days ago and bought the dimensionbridge/adapter for the much stronger fan. In other words with just 30-60 mins of simple work or so we could easily upgrade the ventilation from 800 m3/h to 2000 m3/h.

Only thing needed for it is some very basic electrical work (getting the cut power cable a new plug) and replacing the existing fan in the ceiling. Finally adjusting the length of the exhaust pipe with an angle grinder.

I’m game once I’m back in the new year!

Alright! New year, new projects!
Sorry about the delay. Laser is fully functional, tested and calibrated.
Hampus has sorted the ventilation so heavier jobs can be done.
Was thinking of having a primary workshop and tutorial very soon, se how many are interested.

Who are interested in participation in this session?
There will be more opportunities within a week or two, then as a structured, paid course. Perhaps also include some sort if internal certification for usage of the machine.

I’m a bit rusty myself but I’ll be using the same knowledge list I made for stugan way back. https://drive.google.com/open?id=1aXsewnr_aAEhgnCorGztRnm4nB6lFsrP
Another good resource for usage, designing files, material etc:
http://makeict.org/wiki/Laser_Cutter (just disregard from the references to Lightburn, this software is sadly not compatible with our laser, it uses Lasercut 5.3, and import vector graphics to that. http://makeict.org/wiki/Designing_for_the_laser_cutter#DXF_import_to_LaserCut)
Its a good idea to bring own computers and own designs to practice doing a small project individually.

We might be a bit low on materials so if you have any fun stuff to spare bring it too. See the knowledge list for info concerning materials.

I’m interested but I only have time on the weekends

I’ve replied in the other thread “Use of Laser Cutter” found here.

I think we can lay this old and very long thread to rest for now and create new and more specific threads for the exciting uses of the space. Hooray for the container! It’s exciting following this thread from start to finish and seeing the end results. It happened!