This is our official activity plan for 2021. It does not include everything that will happen at Blivande, and some of the things in this plan might not happen. This plan is also available as a PDF.

Vision: A co-created village in the city 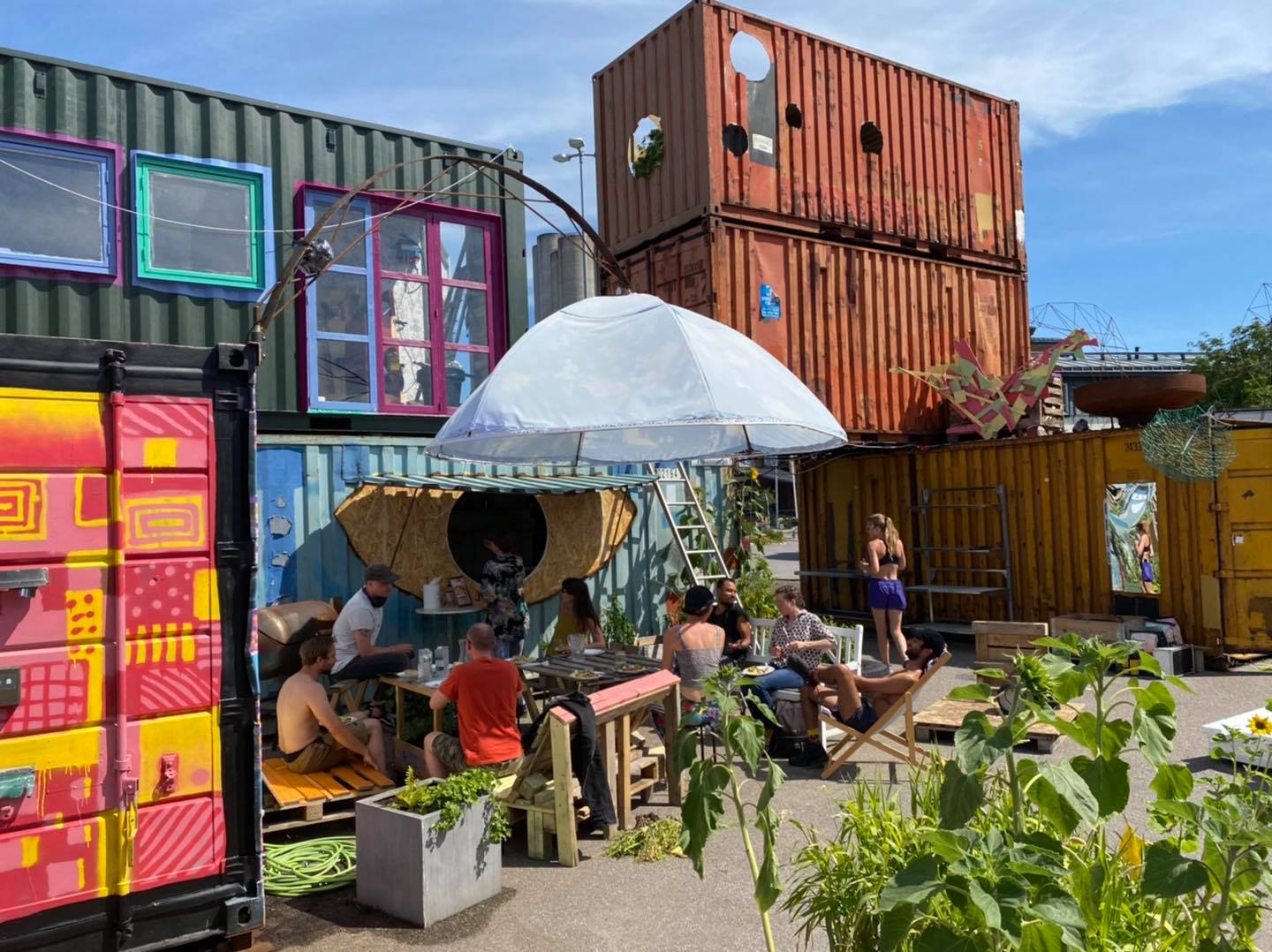 Cultivating creative collaboration in the arts requires a shift in how we think about categories. Traditionally, art has been isolated from other avenues of work. There are many reasons for this, including that artists require access to rough spaces to build in, which is often seen as incompatible with other uses. However, much is gained by a space that allows for cross-pollination between people of different skills and professions. Sculptors and engineers. Plumbers and architects. Painters and lawyers. Performers and computer scientists. Welders and scenographers. We believe that such a place is possible, and we are building it.

Blivande should be a creative village in the city and an oasis of different independent but interdependent initiatives. In 2021, we are inviting the city to Frihamnstorget for a series of art exhibitions and participatory events. Coming to Frihamstorget should feel like moving to a friendly small town – you are immediately invited to co-create and participate, and nobody is asking you to buy anything to be allowed to stay.

We see Blivande as an experiment in stewarding and cultivating a self-sustaining ecosystem, and our goal is to develop it into a model that can be replicated. We are joined in this experiment by kindred communities around the world, with whom we collaborate both formally and informally. We develop methodologies and tools and cross-reference with other initiatives to learn and level up together.

We have set as an explicit goal to blur the boundaries between professional and amateur, and between artist and audience. This, in turn, opens up for collaboration across categories among our members. Members in the arts involve members in their projects who do not identify as artists, and trust and understanding are built among them. Through that trust, it becomes possible to use resources according to ability and need, instead of through market forces. Incentives are geared towards cultivating a regenerative ecosystem; priming its members to strive for collaboration and symbiotic synergy rather than individualistic monetary profit. 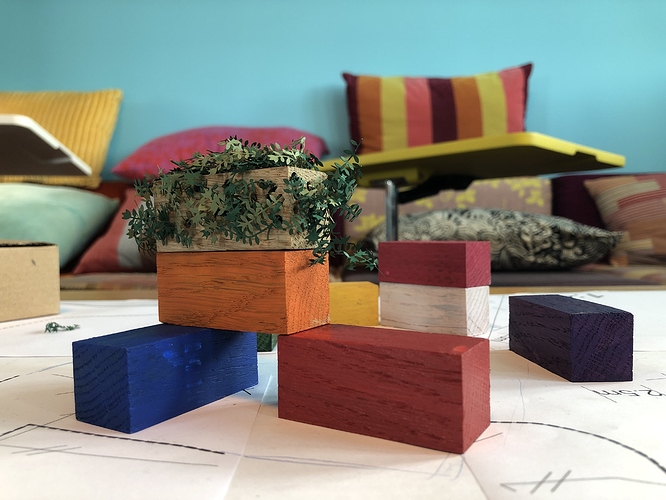 Blivande Idéer AB was founded in August of 2018 with the explicit purpose of renting and maintaining a house for participatory culture and art. Blivande was founded in symbiosis with the two existing associations Noden and Stugan, which had both maintained spaces for participatory culture in Sickla in a building that was set to be demolished in late 2018.

Noden had existed since 2015 and was a non-commercial community space for participatory culture and art, loosely connected to the international “Burning Man” movement of participatory festivals. Stugan was a makerspace for artists in the same community. Blivande was started with the explicit purpose of providing a new home for these communities.

Blivande Idéer AB is a not-for-profit company formally owned by four people who each hold 25% ownership. Those people are Hugi Asgeirsson, Hampus Lindblad, Sergio Rodrigo Vargas Quiroga, and Linnéa Appert. House Blivande and the adjoining Frihamnstorget are maintained and curated by the core team of Blivande Idéer AB. Blivande is a term used both to relate to the company and to the community ecosystem of associations, artists, and creators around the house and Frihamnstorget.

It is the stated intention of the group of owners to move towards a more communal form of ownership once the core activities have become self-sustaining. Shares in Blivande should not generate passive income to its shareholders. Rather, the shareholders are stewards of the vision and direction of the organization until another structure is put in place.

What unites the activities taking place is that they are all created with the intention of bringing people together, ideally reinforcing a sense of purpose and meaning in our everyday lives. We believe that participatory culture and art can help counter an ongoing crisis of lack of purpose and social isolation.

Microsolidarity is a set of practices for mutual support between peers. These methods bring us out of individualism and into a more relational way of being. We try to foster solidarity by encouraging the formation of crews that support each other through emotional & economic reciprocity.

We believe that we are always becoming and that flux is the only constant. Blivande is the Swedish word for “becoming” and we have chosen it to signify the essence of what we want to cultivate in ourselves and in society – that we are always in a state of becoming with everything around us. 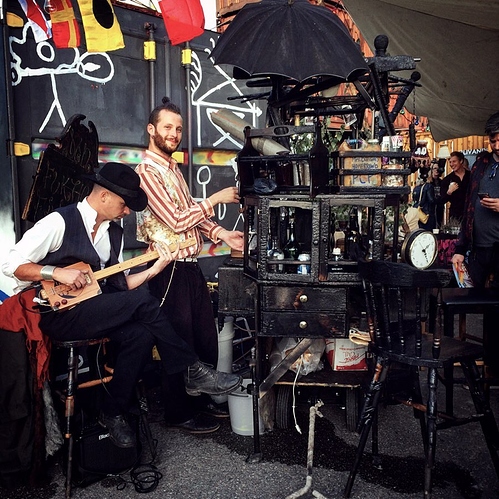 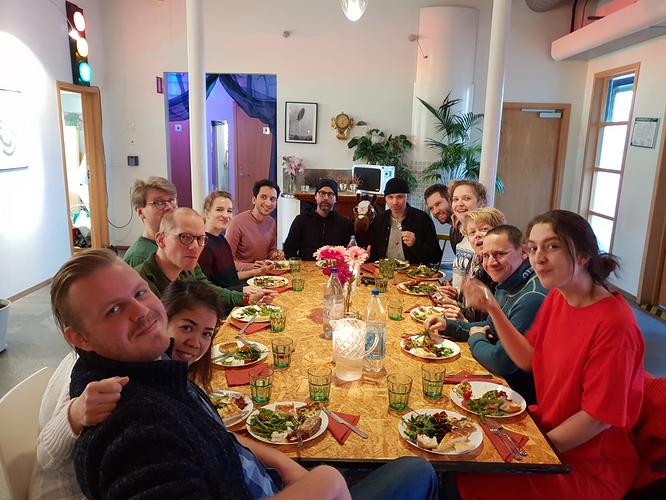 In January 2021, Blivande is projected to have 50 members in our workshops and workspaces. By the end of 2021, we are aiming to reach 80 members, which is our full capacity at House Blivande. After that, new members would be admitted when old members leave. In 2021 we will also focus on building more capacity for artists to work and create at Frihamnstorget, opening the possibility for larger art workshops in containers in the future. From 2022 onward, Frihamnstorget would be our main avenue of expansion and growth.

Goal: By December 31st, 2021, Blivande aims to have 80 members in our workshops and workspaces. 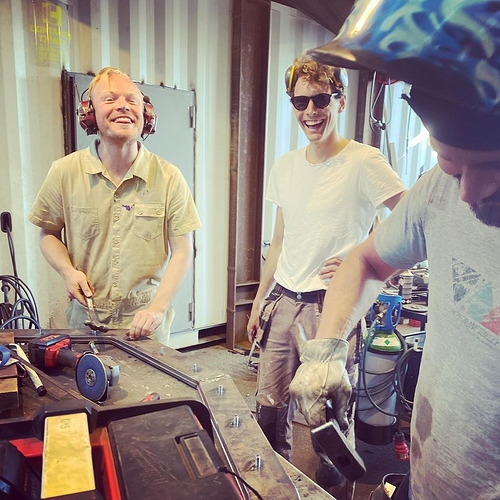 Blivande currently has a small and mostly unpaid team that works on maintaining the core activities and doing outreach and engagement for Blivande as a whole. Some of the core team are paid through project grants specific to their line of work. This includes community management and outreach for the Vinnova-funded Plato Project.

In the plan for 2020, we had planned to start paying salaries for key core team members in 2021. Like most other institutions in culture and arts, Blivande was hard hit by Covid-19, which wiped out our event income. This has made it impossible to pay salaries as planned in 2021 without the help of grants. If we receive grants from Region Stockholm, we plan to hire a Coordinating Director and an Outreach Coordinator.

Goals
If Blivande receives grants to allow for it, we will hire:

Frihamnstorget is a meeting place for grassroots art, crafts, creativity, events, and culture – open to your initiative. We have transformed a parking lot into a communal square for culture and art. Frihamnstorget is a true “third place” - neither fully private nor public, curated and maintained by its members. A comparable structure might be a Swedish “koloniområde” – a patchwork of independent but interdependent initiatives that collaborate to create a place together.

Frihamnstorget questions established principles of city planning and placemaking in Sweden today, and we are tilling the earth for the creativity of its members.

A typical activity at Frihamnstorget is “Work Is Play”. Once a week during the summer months, people are invited to spend the day on the square and co-create projects while a DJ plays tunes, and food and drink are served from the café. Everyone is invited to pick up a tool or a paintbrush, or simply flop down in a hammock with a cold drink. Artists and makers get extra hands working on their projects, while those with less experience get an accessible way to learn new skills from talented people.

Blivande is the steward of Frihamnstorget. We coordinate activities, maintain the square as a whole, and ensure the safety of all installations.

Blivande Idéer AB rents both House Blivande and the parking lot that has become Frihamnstorget from Stockholms Hamnar (Ports of Stockholm). Frihamnstorget is created and run in dialogue with them and the lease is renewed on an annual basis.

This sort of grassroots “place stewardship” is being researched and developed by Blivande alongside Stockholm University, Edgeryders, and SenseStack in the Plato Project - a Vinnova funded project in “Civic Tech”. We build custom online tools and methodologies for others around the world to adopt. 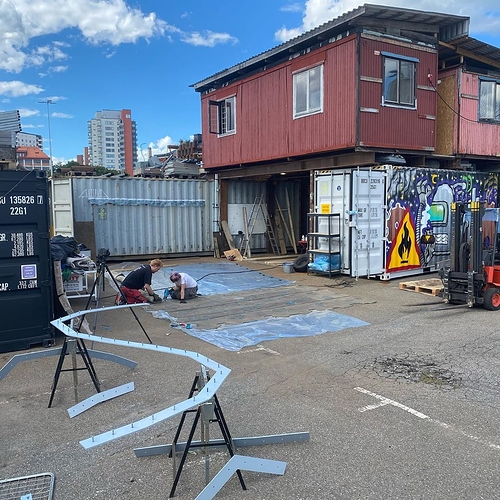 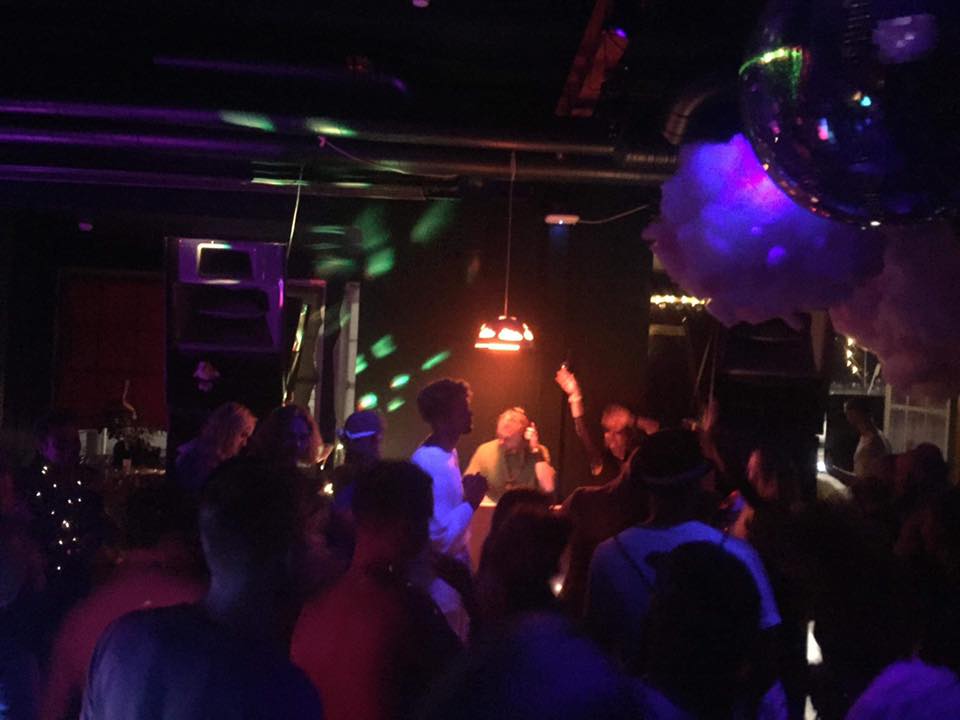 House Blivande is usually open to the public every Monday to Thursday from 18:00 to 23:00 and every Sunday from 13:00 to 19:00. During these hours, activities are held by the association Noden. What unites the activities taking place is that they are all created with the intention of bringing people together, ideally contributing to reinforcing a sense of purpose and meaning in everyday life. Noden activities are open to the public, but reoccurring participants are expected to pay 100 SEK on a monthly basis to the association.

Blivande also aims to be the most unique and intimate small event venue in Stockholm, and we accommodate private events, exhibitions, and clubs as well as our pubic community events. 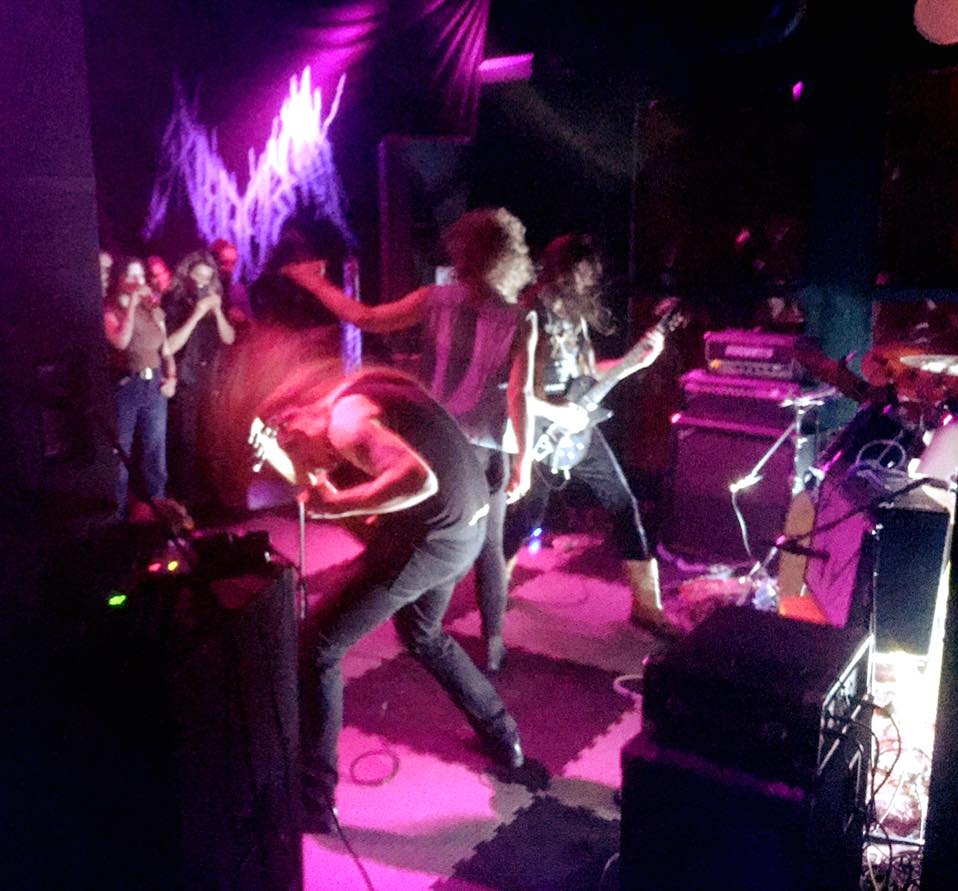 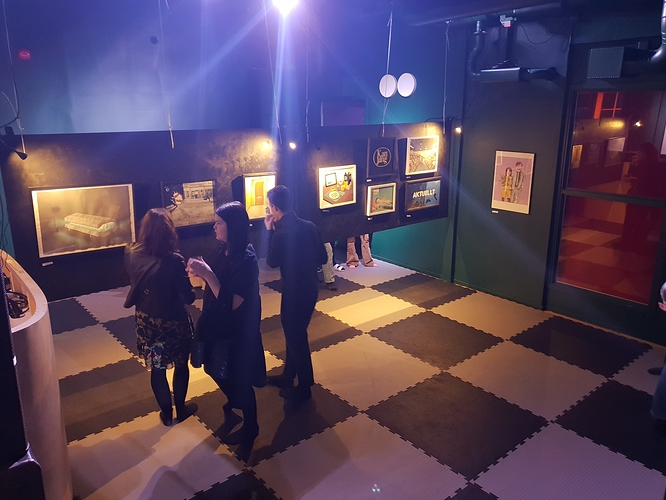 In 2021 we are planning a series of participatory events and art projects that will explore what participation can mean across genre and media. This event series is closely tied to our art workshops and Frihamnstorget, and each project and activity is designed to involve and engage the participants in the future development and community of Blivande. Our goal is for every participant to feel like a co-creator of Blivande and Frihamstorget, and that they will feel secure in referring to these as “their” community. All events in the “Always Becoming” event series are open to the public. 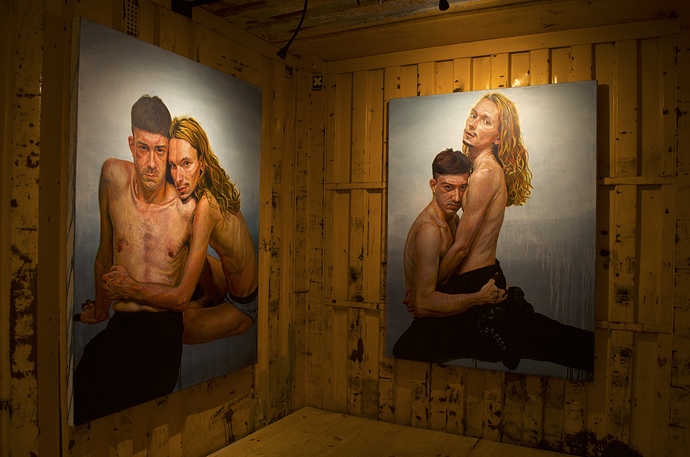 Gallery Frihamnstorget is available to selected artists for a calendar month at a time. Artists are selected based on their proposed exhibitions submitted on our platform as well as through direct invitation. Exhibiting at Gallery Frihamnstorget is free and access to tools, machines, and workspaces can be given through signing up for a one-month membership to House Blivande. We currently do not take any provisions from art sold at the gallery.

Together with SenseStack, a company owned in part by Blivande Idéer, along with Edgeryders, and Stockholm University, Blivande is developing a set of digital tools and services to placemaking and place stewardship.

Plato (Placemaking Tools) is a digital service for citizen-driven placemaking initiatives. A collection of integrated digital platforms focuses on every part of the process, from idea to decision, implementation, and maintenance. Cooperation between citizens and the public sector is enabled and simplified by integrating and strengthening all parts of the process into the same suite of tools. Citizen initiatives are taken care of, while the public sector’s processes are simplified and made accessible.

Plato takes a holistic approach to digital placemaking tools and integrates testing and workshops directly from the start. To ensure usability and quality, the tool and methods are developed while being used in a real placemaking use case. This use case is Frihamnstorget, which uses the project ́s tools and methods in collaboration with students and researchers from Stockholm University.

Plato Project is led by Blivande co-founder Hugi Asgeirsson and members Jakob Skote and Gustav Larsson. Plato Project is funded by Vinnova with 2 million SEK and runs until August 2021. 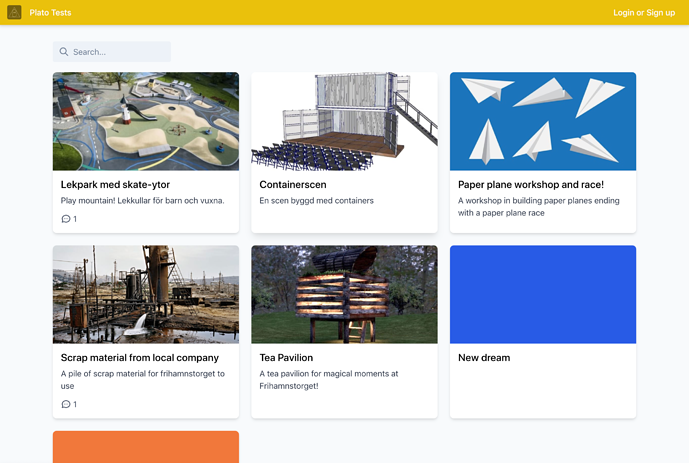 Reading this made my day. If I can support this in any way, happy to do so.

The fact that you guys put Bruce in there is brilliant 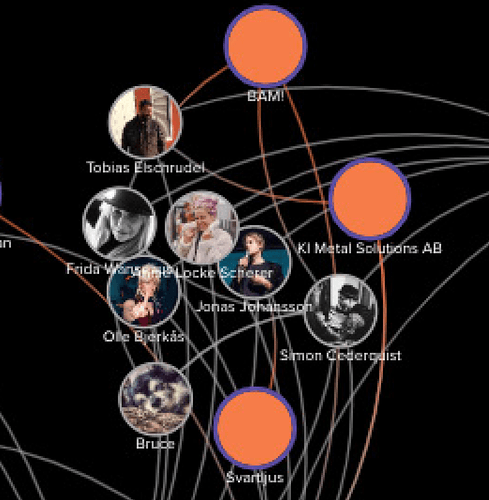 Plato (Placemaking Tools) is a digital service for citizen-driven placemaking initiatives. A collection of integrated digital platforms focuses on every part of the process, from idea to decision, implementation, and maintenance. Cooperation between citizens and the public sector is enabled and simplified by integrating and strengthening all parts of the process into the same suite of tools. Citizen initiatives are taken care of, while the public sector’s processes are simplified and made accessible.

and this https://www.platoproject.org/ (is there an english version available @hugi?)
… is there more?

@jakobskote is working on an English version, it should be ready pretty soon. But the platform you tried is a part of it. Did you find any use for it?

Did you find any use for it?

Probably will use it for next phase of Langhuus. At the moment it is more about pausing the project for a year or two since the venue we use is going to be renovated.